A girl from 11 years old modifies the body and showed how she has changed over the years. A mixture of glamorous Barbie and a demon came out

A resident of Italy has been modifying the body since the age of 11 and showed how she has changed over the years of experiments on herself. The girl seemed to be possessed by Barbie and a demon at once – it turned out glamorous and frightening at the same time. True, the Italian is not going to stop there.

A fan of body modifications from Rome named Aydin Maud became interested in experimenting on herself at the age of 11, getting her first tattoos and piercings. By the age of 19, Aydin had accumulated so many changes that it is no longer possible to recognize her former girl in her, writes Daily Star.

According to Maud, as a child, she secretly pierced her face with a needle. And already at the age of 15, I made myself a splitting of the tongue (split) with my own hands. By the way, doctors do not recommend doing this even with piercing masters, since the tongue contains an artery, the rupture of which can be fatal as a result of blood loss.

Aydin now has over 20 piercings and 12 scars, tattoos on her body and eyeballs, labia implants, tunnels in her nostrils, cheeks and earlobes, and fillers in her cheeks and lips.


Read on Medialeaks
Powerful and handsome. Here’s everything you need to know about MSI’s new laptop

By her own calculations, she spent more than five thousand dollars (almost 380 thousand rubles) on her procedures. According to the girl, she was inspired to create her unique image by another lover of modifications – Maria Jose Cristerna, who is better known as the “vampire woman”. 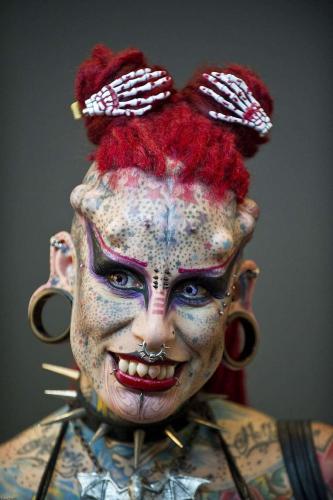 As for the reaction of others to Aydin’s appearance, she says that she does not pay attention to criticism. According to her, the only person she should please is herself.

They call me ugly, but honestly, I don’t even consider it an insult. I’m a normal person, I live my best life, and if someone doesn’t like it, they can just stay away from me. Fortunately, I am surrounded by wonderful people who support me. I usually get along better with people who don’t have the same lifestyle as mine, which is amazing, ”Aydin says.

The girl has no plans to stop and hopes to get new tattoos, piercings, as well as get a Brazilian buttock lift and breast augmentation. Mod also wants to put metal teeth.

My ultimate goal doesn’t really exist as I don’t think I’ll ever stop. I want to cover my entire body with tattoos, add more piercings, get the permanent metal teeth that I am already working on. I will probably tattoo my eyes again to make them blacker. I also do lip fillers every month, – shared Aydin.

Maud advises others to be bold and choose what to do on their own, if it doesn’t harm anyone.

Be different, but always be yourself, ”Aydin said.

I could not stop changing my own appearance and the man who did the piercing, and then – as in a fog. When he woke up, he had already lost his human appearance.

Another fan of the modification has lost his face, borrowing the identity of the Red Skull. Cosplay has turned into reality for him, and now he is the real head of Hydra.