back to the furious furyo of the future

Tokyo Revengers, is an animated one that talks about fighting and going back in time, but not only! The first part of season 1 has just ended on CrunchyRoll. The opportunity for us to come back to this wonderful series, much appreciated by the author of these lines.

Tokyo Revengers is basically a manga by Ken Wakui published by Glénat whose publication still continues with 13 volumes in France and 22 in Japan. It is therefore far from being finished in manga and therefore in anime. The first part of the animated broadcast on CrunchyRoll has 12 episodes and covers the first four volumes of the series. And she’s just excellent.

The fatal fall of the beginning

For those who haven’t read the manga or watched this excellent anime, here is the pitch: Takemichi Hanagaki, a young loser, is employed in a video rental store (yes, it still exists in Japan). He learns of the death of his youthful sweetheart Hinata Tachibana killed by a truck in a settling of scores between members of Tokyo Manjikai, one of the biggest gangs in Tokyo. Still tormented by the death of this young woman, Takemichi puts his life in perspective while he waits for the subway.

He barely had time to feel that he was being pushed unceremoniously that he found himself on the metro tracks when it was coming at full speed. His last thought is for Hinata. End Of the history. Finally Almost, he finds himself thrown back 12 years when he was in college, when he thought he was a scum and he too belonged to Tokyo Manjikai. Not really understanding what is happening to him, he remembers and suffers the short of time passing. By saving Naoto Tachibana, Hinata’s brother from bullying, who also died with his sister 12 years later, he understands that he can change the past and therefore possibly the future.

By ricochet effect, Takemichi activates a dormant power in Naoto: when the two boys shake hands, Takemichi can travel in the past always 12 years back. An understanding of this power that will potentially allow Naoto and Takemichi to save Hinata and understand the reason for this feud within the Tokyo Manjikai. A story mixing gang war, investigation, time travel and revenge. It has something to intrigue. 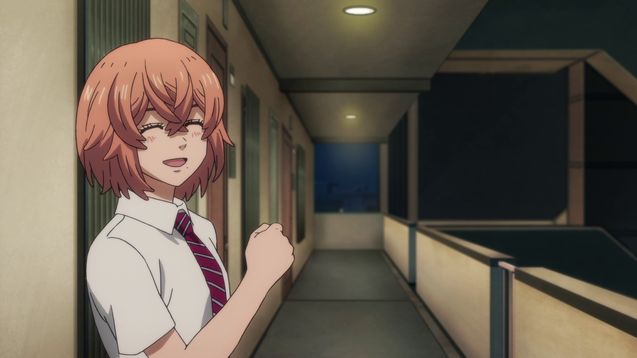 As said above, the anime takes the first four volumes of the manga. We are therefore witnessing the first part of the story which lays the foundations, presents the emblematic characters, determines the fate of the main character and his stake. This long exposure is not without interest, on the contrary. Tokyo Revengers is above all a Furyo and as in any good Furyo, everything is based on the characters.

To define what a Furyo, it is above all thug stories from the 70s to the early 90s, in Japan. The pictures with the big, bleached haired bananas, motorcycles, gangs and the fight to easily roughen the subject. In character Furyo, we would have Onizuka from GTO, or Sakuragi from Slam Dunk ou Yusuke de Yu Yu Hakusho. In emblematic history in this genre, we have Scum Blues, Young GTO or Bakuen Retto, to recite nobody else but them. 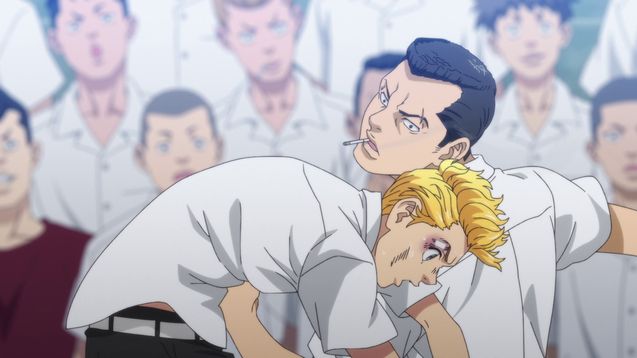 In these types of stories, we will seek the sensitivity of those young people who want to change their world to establish a new one while fighting and adhering to moral principles of their own. There are often big, very emblematic fights, but above all touching and moving speeches.

Here in Tokyo Revengers, all these ingredients specific to Furyo are brought together: fights, conspiracies, moments of doubt, moments of victory and emphasis, but above all colorful characters like the charismatic leader Mikey, or the sensitive right arm and gross, Draken, and the reasonable Takemichi. The latter assumes his weaknesses to make those around him more human and that is totally Furyo. Cause sometimes you don’t have to hit and hit yourself to be a man, be sensitive and let your emotions surface without being afraid, are also pillars of masculinity as understood by gender.

With a story that focuses on the loss of a loved one, the anime deeply touches the hearts of its audience. The fantasy side energizes the story even more via the butterfly effects of temporal changes and accentuates the dramaturgy. The finale of the 12th episode is deeply moving. It’s so beautiful and Furyo. 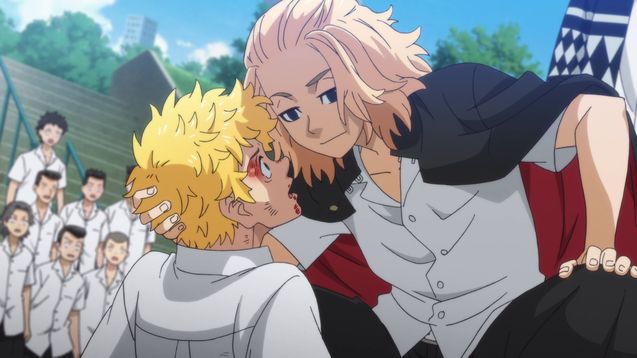 On the animation side, it’s the Liden Films studio, known for the Chronicles of Arslan – excellent anime and manga – or lately for the original Imagine, a cambrousard from the last dungeon in the starting town!, who gets down to the job. And we can say that it is a great success!

Why ? Because the series, directed by Koichi Hatsumi with the scripts of Yasuyuki Muto, perfectly takes the atmosphere of the manga while sublimating it. The animation is fluid without downtime, especially in the combat phases which are particularly well animated. The use of 3D is perfectly mastered, when you see the plans on motorcycles for example. And the editing is arranged in an intelligent way, and lets not only the fights but also the emotional sequences, gain in scale gradually.

Nothing is done in a hurry. Because it is a series that takes the time to be watched and appreciated for the correct interpretation of these characters and its dialogues. Mention still special to the seiyu in the original version and also to the French actor for the French version, it is totally sincere and it takes the guts. 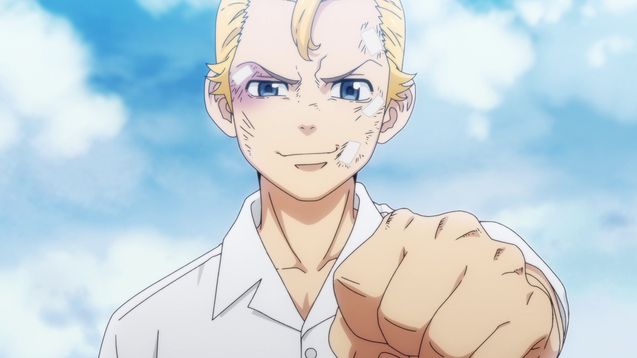 Takemichi with his heart in his hand

A furious end of the arc

The series therefore ended a first arc on CrunchyRoll in VF and VOSTFR with a sick ending that has turned the hearts of all the spectators and which promises even more fighting, emotion and turnaround. The series continues on the platform to follow Takemichi’s hectic life and his revenge on life.

Tokyo Revengers, it’s more than an anime or a manga, it’s a story that is lived. The episodes go by and we take affection for these characters who want to live their lives with the ardor of youth and their respective ideal. The returns in time reinforce this aspect even more. Without being moralistic. They show the passages between adult life and youth, and especially the choices imposed on us, both by society and by those around us. With overflowing ambitions, unhealthy people, hurt egos, Tokyo Revengers sublimely highlights discomfort and takes its luminous revenge in this dark world.

A story that we want to take head on, it is so touching and strong at the same time. Tokyo Revengers is a series to watch on CrunchyRoll with the furious desire to do battle, while having handkerchiefs to wipe the tears on the side.

This is an article published in the framework of a partnership. But what is a Large Screen partnership?

Tweet of the Week #150: Japanese Countryside Anime vs Reality

Are small towns and the countryside just as beautiful in real life as depicted in anime? Bustling cities and epic...

New images shared on the occasion of the MAPPA exhibition

The new chapter of Jujutsu Kaisen showed fans the latest in the life of Yuji Itadori. In the meantime, some unpublished...