At present, the Science and Technology Innovation Board has formed significant benefits of industrial agglomeration. Attracted by multiple factors such as relatively high valuations, many innovative biomedical products including BeiGene (06160, HK) and Tianjing Bio (IMAB, US) Enterprises have taken substantial steps on the road to “back to A”. Nuocheng Jianhua-B (09969, HK), which was listed in Hong Kong only in March 2020, has also become one of them, and its IPO application on the Science and Technology Innovation Board was accepted by the Shanghai Stock Exchange on September 13.

In addition, Shi Yigong, an academician of the Chinese Academy of Sciences and a well-known structural biologist, is one of the co-founders of Nuocheng Jianhua.

The capital market’s response to Nuocheng Jianhua’s impact on the A+H pattern was relatively flat. As of September 17, the company’s stock price closed at 20.60 Hong Kong dollars per share, and the recent trend has been relatively stable.

Shi Yigong is a co-founder but is it a technical pillar?

According to the reporter of “Daily Economic News”, Nuocheng Jianhua is an innovative biomedical company, focusing on tumors and autoimmune diseases that have huge unmet clinical needs, and developing similar products with breakthrough potential in the global market. Best or first-in-class drug.

Shi Yigong currently serves as a non-executive director of Nuocheng Jianhua, and Shi Yigong’s spouse Zhao Renbin serves as an executive director of the company. According to the prospectus, Sunny View (Zhao Renbin holds 100%), Zhao Renbin’s family trust and his immediate family members hold approximately 148 million shares, accounting for 9.84% of the company’s total issued shares, making it the third largest shareholder as a whole . 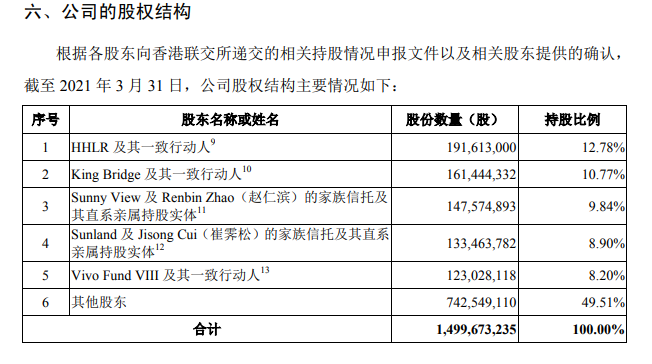 In addition to holding shares, Shi Yigong also signed a “Strategic Cooperation Agreement” with Nuocheng Jianhua, stipulating that Shi Yigong and his laboratory will use its existing technology accumulation and technology platform to provide Nuocheng Jianhua with diversified Services to assist the company in solving specific problems encountered in the process of new drug research and development, such as protein crystallization screening, protein structure analysis, protein function analysis, and optimization of the combination of target proteins and candidate compounds; at the same time, it provides in-depth guidance for the company’s drug target selection.

Judging from the agreement and the information disclosed by Nuocheng Jianhua, Shi Yigong seems to play more of the role of a scientific consultant within the company; and as a structural biologist, Shi Yigong’s research field can play a role in the development of new drugs. effect? Is Shi Yigong’s seat as a technical pillar or something else for Nuocheng Jianhua? “Daily Economic News” sent an interview letter to Nuocheng Jianhua on this issue, but had not received a reply as of the time of publication.

In addition, the prospectus also specifically reminds that Nuocheng Jianhua currently has the risk of relatively dispersed equity, no controlling shareholders and actual controllers. As of March 31, 2021, Hillhouse’s HHLR and its concerted actors are the largest shareholder of Nuocheng Jianhua, with a total shareholding ratio of 12.78%. There is no major shareholder directly holding more than 5% of the company’s shares. A concerted action relationship, no single shareholder of the company can control the general meeting of shareholders or have a decisive influence on the resolutions of the general meeting of shareholders.

From the perspective of the R&D pipeline, Nuocheng Jianhua has a product that has been conditionally approved by the State Food and Drug Administration in December 2020, 6 products are in the I/II/III phase of clinical trials, and 8 products are in the preclinical stage. . Among them, abutinib is not only the core product of Nuocheng Jianhua, but also the company’s only product that has been successfully listed. It is a small molecule BTK inhibitor with high selectivity and good blood-brain barrier permeability. It has been included in the 2021 version of “CSCO Lymphoma Diagnosis and Treatment Guidelines”, and is classified as relapsed or refractory CLL/SLL (chronic lymphoma) Level I recommendations for the treatment of leukemia/small cell lymphoma) and relapsed or refractory MCL (mantle cell lymphoma).

In terms of the competitive landscape, there are currently 5 BTK inhibitors that have been marketed globally for the treatment of B-cell lymphoma, namely Ibrutinib jointly developed and commercialized by Johnson & Johnson and AbbVie, and Zebutin from BeiGene Ni, Nuocheng Jianhua’s abutinib, AstraZeneca’s acatinib and Ono Pharmaceutical’s Tilarrutinib. Among them, ibrutinib, zebutinib and obetinib have been approved in China, and acatinib is in the phase III clinical stage in China.

Everbright Securities once stated in a research report that abutinib has the potential to become a potential best-in-class BTK inhibitor. Compared with competing products, abutinib has a lower incidence of adverse events, especially the incidence of atrial fibrillation, diarrhea, secondary tumors, and infection rates of grade 3 or above. In the indications of relapsed/refractory chronic lymphocytic leukemia (r/r CLL)/small lymphocytic lymphoma (r/r SLL), the effectiveness index of abutinib is even better, and the investigator’s follow-up time is only 25.6 In the case of months, the primary endpoint of obatinib in the treatment of r/r CLL/SLL-the overall response rate (ORR) has reached 93.9%, which exceeds the follow-up time of ibrutinib for nearly 6 years, of which the complete response rate (CR) It reached 21.3%, much higher than 9.0% of ibrutinib, and the effectiveness advantage was very obvious.

There are still many problems to be solved

It is worth noting that it only took about 32 months for Obutinib to obtain CDE marketing approval from the beginning of the clinical trial, which is much greater than the 88 months for Ibrutinib and the 49 months for Zebutinib. shorten.

The rapid approval of Obutinib is due to the high-efficiency clinical execution of Nuocheng Jianhua and the high-quality clinical data displayed by Obutinib. On the other hand, it is also due to the Conditional approval for Phase II single-arm clinical trials.

The prospectus shows that, according to the “Drug Registration Certificate” of Obutinib, Nuocheng Jianhua needs to complete Phase III confirmatory clinical trials after Oboutinib is listed. After completing the above confirmatory clinical trials and the test results can confirm the clinical benefit, the company’s Obutinib can be fully approved. Therefore, if the company fails to meet the relevant requirements put forward by the State Food and Drug Administration when it approves the listing of abutinib with conditions, it may not apply for re-registration of the drug after the expiration of the drug approval number, and the drug regulatory agency may revoke the conditional marketing authorization, etc. Circumstance, thereby affecting the company’s sales and operations.

In addition to the risk of clinical trials failing to meet the relevant requirements for full approval, there are also factors that restrict its further sales volume in the process of advancing the commercialization of Obutinib. Judging from the sales data in the first three months of this year, a total of 8,507 boxes of obritinib were sold, achieving a drug sales income of 49,810,300 yuan.