The titans, huge and mysterious beings, threaten the last remnant of humanity. For the past 107 years, she lived in relative peace from these creatures behind huge protective walls. But lately attacks from exceptionally intelligent and large titans have been increasing. These have the power to cause the protective masonry to crumble. You are the last hope in the desperate fight against these seemingly overpowering opponents. Each of you takes on the role of a fighter from the so-called reconnaissance troop and bravely faces the danger posed by the colossi. The titans can only be defeated together. Can you together save the last people in this world? In this review, you can find out whether the implementation of the very successful anime series ATTACK ON TITAN is also fun as a deck builder.

We bought ATTACK ON TITAN ourselves.
This does not affect our rating!

attack is the best defense

ATTACK ON TITAN is a fully cooperative deck building game for 1-5 players. The goal is to jointly bring down all four so-called Archenemy titans. The players have to make sure that not all walls are destroyed, that the main deck of cards does not run out and that too many heroes do not die. If one of these happens, the game is lost. 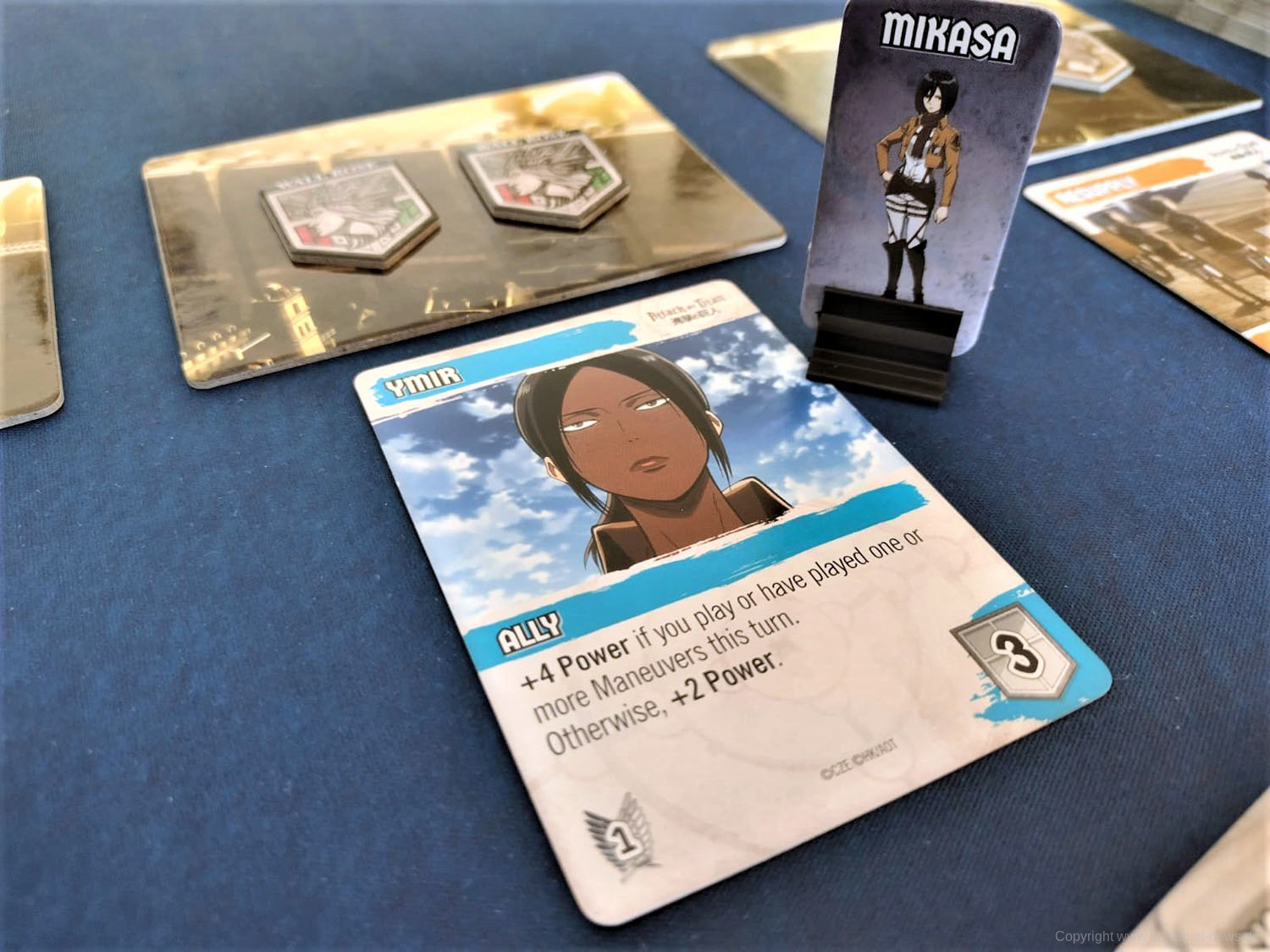 In preparation, each player takes a starter deck consisting of ten cards. This deck initially only contains weak basic actions, but, as is usual with deck building games, it can be gradually improved over the course of the game.

Then a main deck is put together as described in the instructions. This consists of useful equipment and ally cards, but also standard and four Archenemy titans drawn at random.

Now the “town” has to be built. To do this, the five wall tiles are placed in a row and provided with shields, the life points of the wall, so to speak. Each of these wall tiles represents a district of the last bastion of mankind. Districts each have an interior area, in which allies and equipment for their own deck can be found, and an exterior area, from which the attacking titans attack the wall. The main deck will be placed to the right of it and henceforth called “Castle”. To the left of the city the stacks of cards with wounds, “3D gear equipment” and the “Titan on Attack” cards are lined up. 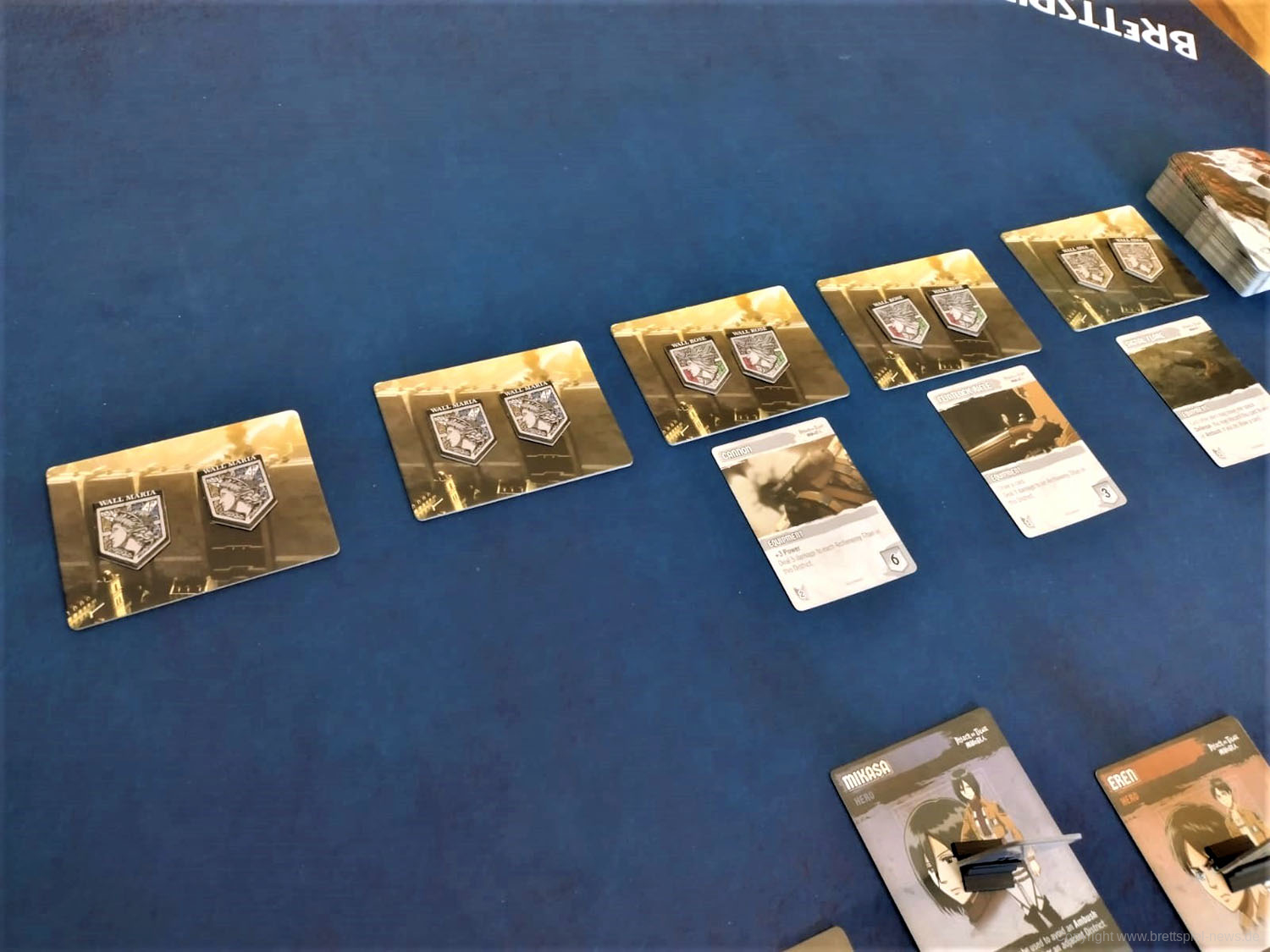 A main deck card is now placed in each district. If a Titan is drawn, it is removed from the game.

Then the actual game begins.

At the beginning of each round, as many cards are revealed from the “Castle” as there are players in the game. In a three-player game, three cards are drawn at the beginning of each round. After each card drawn, a comparison is made as to which inner district currently has the fewest cards on display, because the card is then placed in the inner district with the poorest cards. If there is a tie, the card is placed in the district furthest from the “Castle”. If a Titan card is drawn, it ends up in the respective outer district according to the same rules. Some titans have what is known as an “ambush effect”. This effect, which always triggers a negative event for the players, is resolved immediately after the card is played.

Now the players must jointly decide who receives the starting player marker in this round. Then everyone, beginning with the starting player, resolves their moves one after the other. If the playing figure of the active player is not on the field, he may place it on an inner district of his choice. Then he can play any number of his five cards in hand. Depending on the text on the card, this generates “Power”, “Move” and special effects such as healing wounds. Power can be used to purchase new deck improvement cards when the active player is in the same inner district as the desired card. The purchased card is placed on the personal discard pile. In addition, a titan can be attacked with these power points if he is on the same space as his own playing figure. 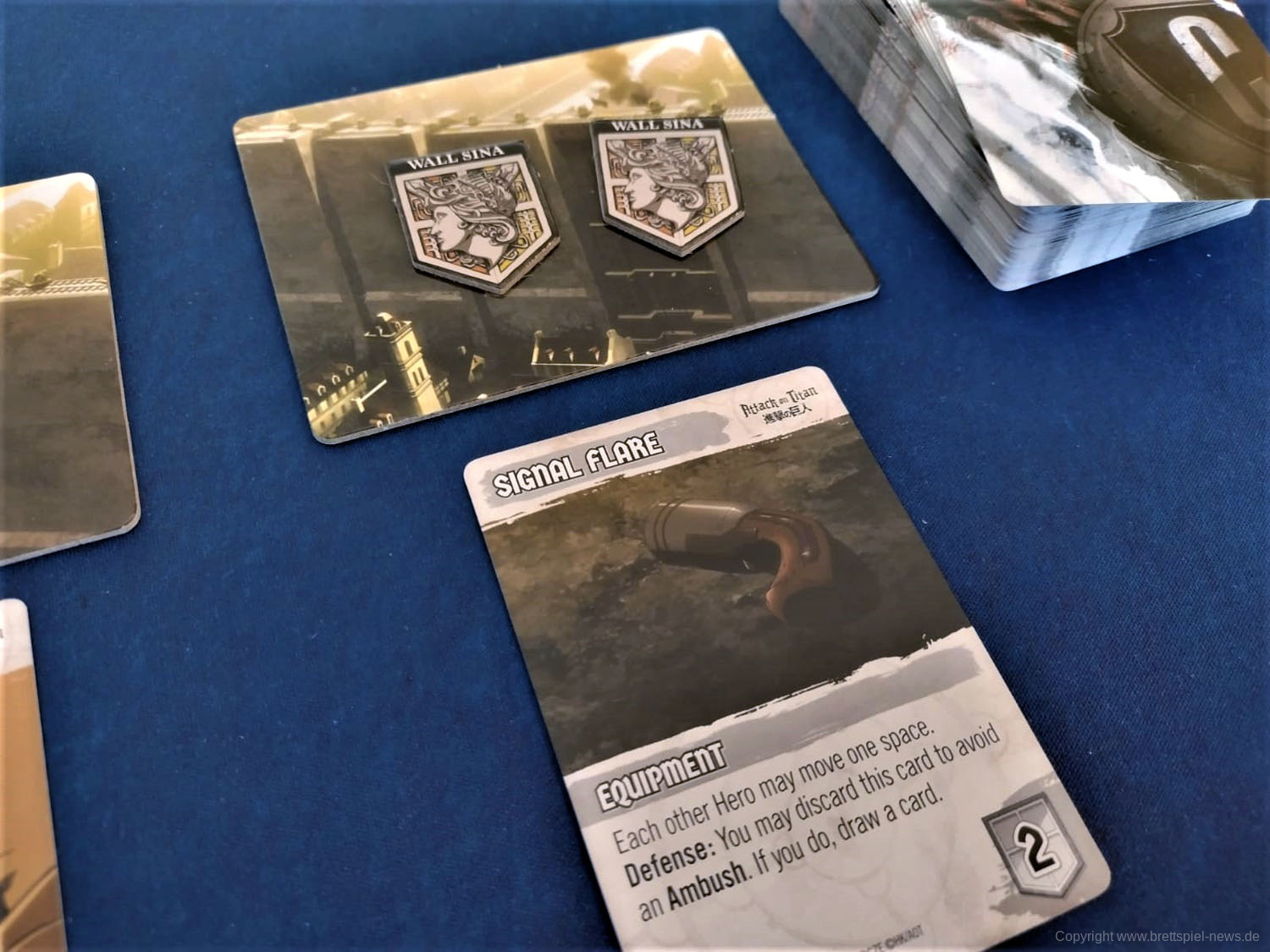 Every Titan has a defense value. This indicates how many power points have to be spent to switch off the Titan and thus take it out of the game. The standard Titans have a Defense Rating of five or less. The four Archenemy titans make it much more difficult for players. First, the “hitpoints” of such a Titan must be reduced to zero before it can be turned off for good. To make matters worse, a “Titan on Attack” card must also be drawn if a fatal blow is attempted. These cards make the Archenemy battles very unpredictable as they give the Titan nasty special abilities, additional defense points, or both.

Quite a few Titans have “Titan Ongoing Effects”. These ensure permanent restrictions or additional threats for players and the wall. In contrast to the one-time ambush effects, the ongoing effects last as long as the respective Titan has not been defeated. 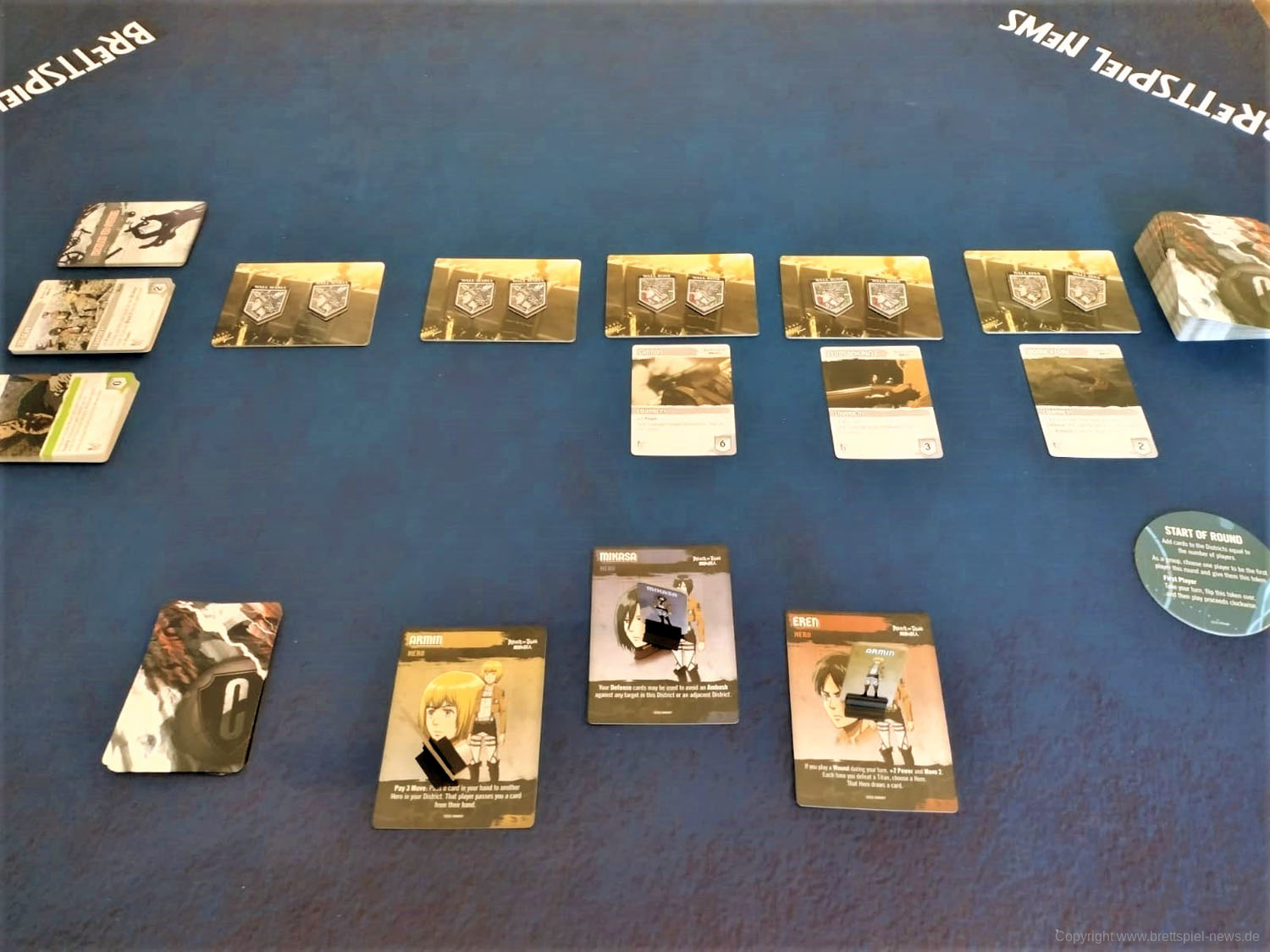 When all players have completed their moves clockwise, the end of the round is heralded. Now every Archenemy Titan in play regenerates its life points, one per player. In addition, each Standard and Archenemy Titan does one or two points of damage to the wall in their district. The players in the same district can prevent damage to the wall, but have to make a sacrifice by drawing a wound card for each point of damage that is to be prevented. These wounds endanger the lives of the players ‘heroes because they end up in the players’ decks. If a player draws two of these cards in a round, the currently controlled hero dies and must be replaced by a new, weaker one. In the worst case, the game ends prematurely if too many fighters have already had to give up the spoon.

If the wall in a district takes two points of damage, it and all cards in the inner district are irretrievably destroyed. The titans located there, however, do not give up, but move on to the next district in the direction of “Castle”. 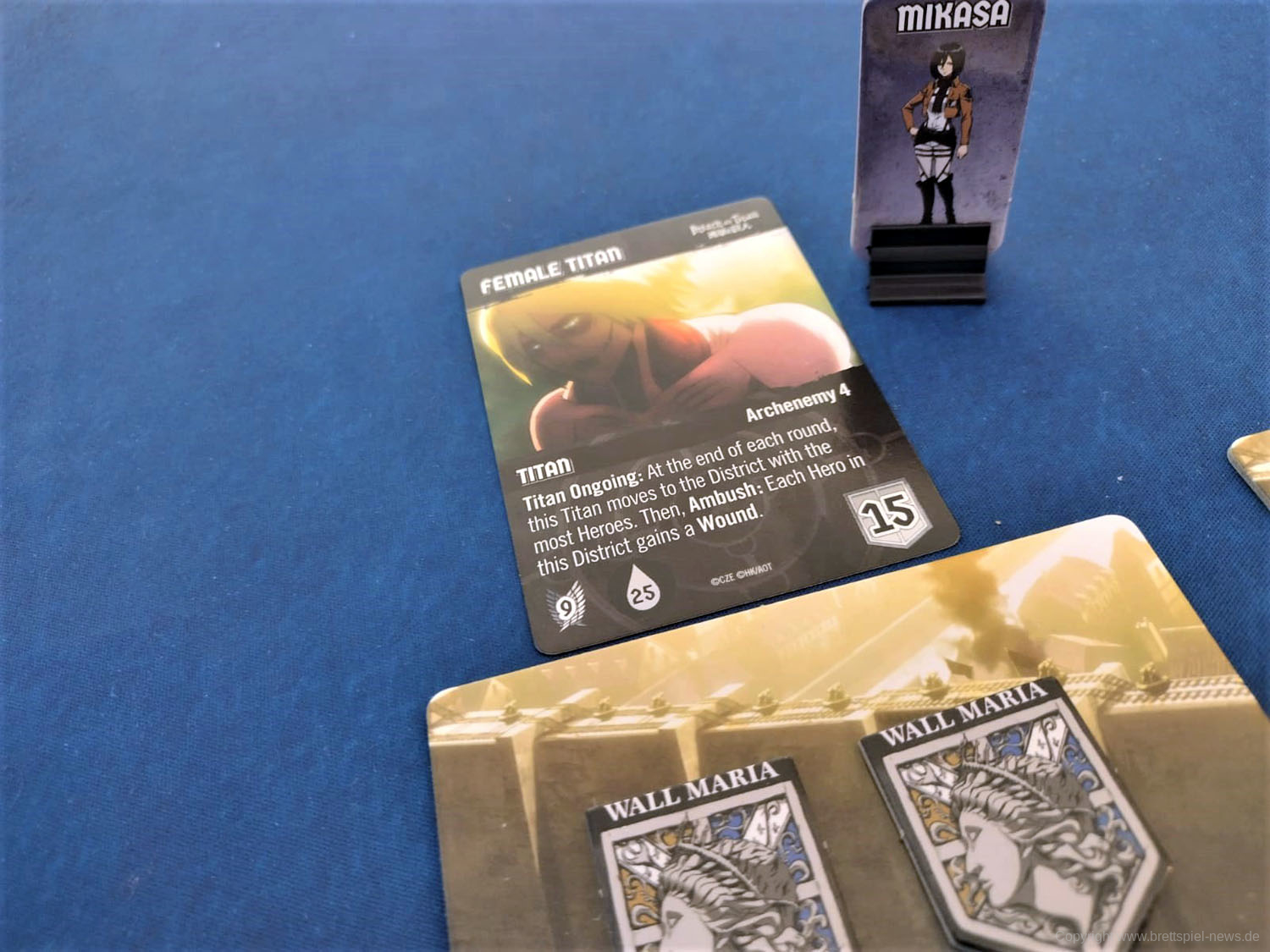 The rounds are repeated until either all 4 Archenemy Titans have been defeated or one of the three conditions for defeat already mentioned occurs.

What’s in the box?

ATTACK ON TITAN contains around 200 good quality cards. The playing figures are cardboard tokens in standees and serve their purpose without particularly sticking out. The illustrations are all scenes from the anime and shouldn’t disappoint fans of the series. Anyway, I liked the pictures a lot. The hit point tokens are a bit small and make handling a bit tricky during the game. Overall, I think the game material is solid. 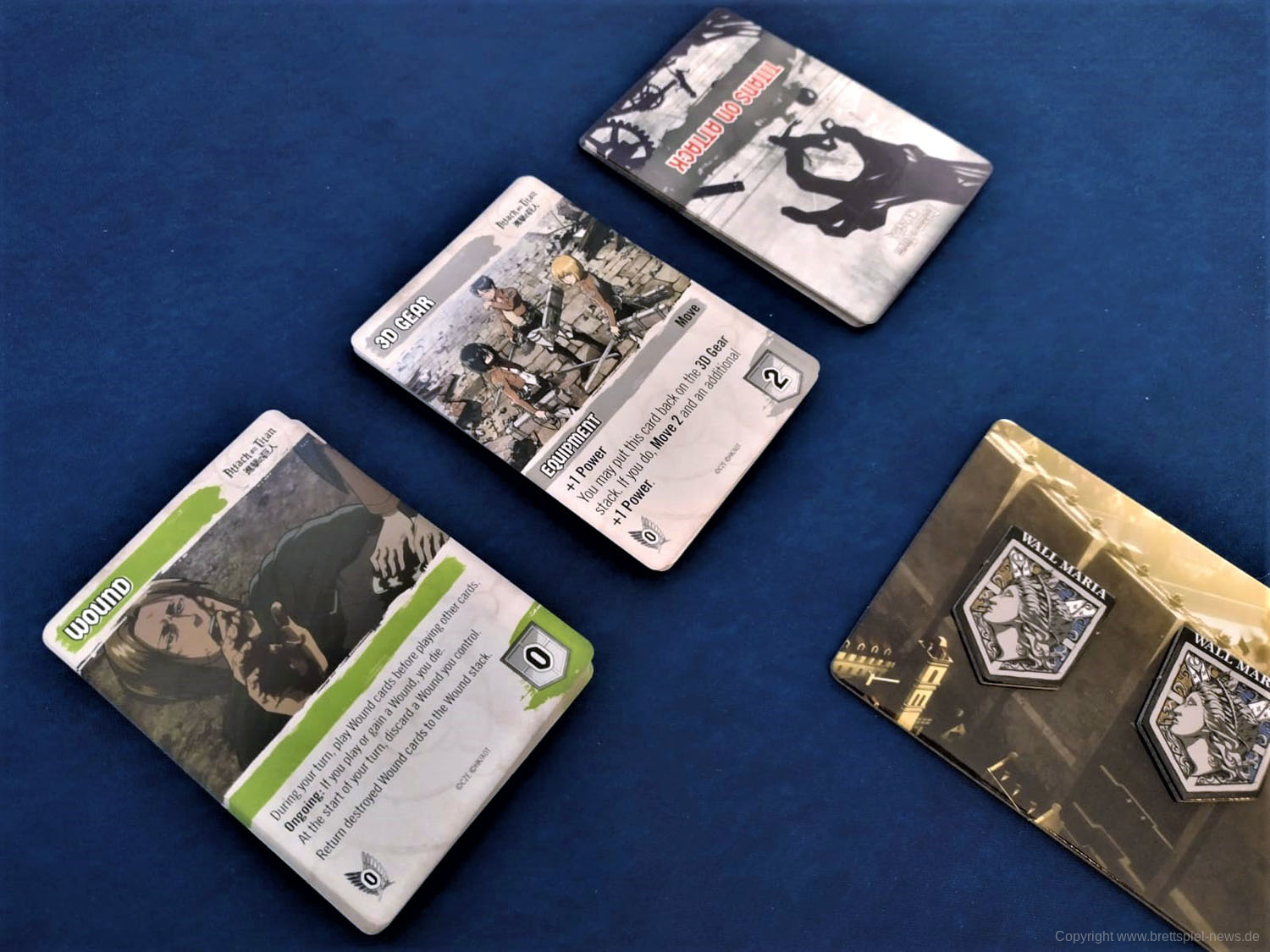 I have nothing wrong with the instructions. The simple gameplay is well explained thanks to many pictures and sample texts. No rule questions remained unanswered in my test rounds. In the last third of the instructions you can find more game variants and explanations of individual card texts.

Amazon is running a huge sale with a good 3,000 films on DVD and Blu-ray. At Amazon they are running right now last...