It’s only a moment, but I’m starting to hate “Odd Taxi” (laughs)

――Returning to the story of the whole work, in addition to the main story, the previous day’s Tan was written down in “Quick Japan”, and an audio drama depicting the interval between each story is distributed on YouTube. Was there a development of such a media mix from the beginning?
This yuanNo, I didn’t really (laughs).
HiragaAfter having the script written, I asked Mr. Konomoto to write an unprecedented amount (laughs). The work has a good reputation, and the media has been asking, “Can I do something?”, So I want to enhance the sub-contents. Under such circumstances, we have you write down the episodes that did not fit in the main part in the form of plus alpha. I think that is the good point of the original work, but it is said that the number has increased too much and the burden on Mr. Konomoto has increased more than expected.
This yuanI agree. For a moment, just for a moment, I started to hate “Odd Taxi” (laughs).
HiragaI’m sorry (laughs). As for the aim, I had an image that the consideration of the work was exciting, so I thought that I could prepare something to complement it.

――Is there a trend to make use of ideas and episodes that you originally wanted to include in the main story in sub-contents?
HiragaIt was there. However, Mr. Konomoto almost matched the flow of the connection with the main story and the sub-contents complementing the work (laughs).

Working with Mr. Konomoto is a series of things that “don’t come up with this kind of thing often”

――How was your work with Mr. Konomoto?
KinoshitaIt was exciting because it was a series of “Don’t come up with this kind of thing”. For example, the scenario of “Tanaka’s Revolution” in episode 4.
HiragaFor a moment, I also wondered if the number of stories had skipped (laughs). So, I remember that when I finally connected to the main story, it became “Dangerous!”. Even though I had delved into the main story properly until the third episode, the composition that suddenly came in with a story different from the one was shocking.
KinoshitaThe life of one ordinary member of society, Tanaka, has been carefully drawn since he was in elementary school, and the story of how the darkness gradually fades after becoming a member of society is beautifully written. What’s more, I was impressed by the change as a human being and the place where I could feel the drama. The last thing that led to the main story was really shocking, and I was excited to say, “This will definitely be interesting!”

–(Lol). By the way, do you have any characters that you have a strong feeling for?
KinoshitaOtogawa still has a feeling for it. I also have a part similar to Otogawa, and I made it by embracing him. The rest is Kabazawa. He is a person who pushes forward with just a desire for approval and loses his tag, but I can understand his feelings very much. I often watch YouTube, so it was fun to draw Kabazawa. Is it Sekiguchi who thought that the character was standing after it became a video? It’s a supporting role, but the serious Yankee character who is loyal to Yano is quite interesting.
HiragaI like the Daimon brothers. That feeling of my younger brother is unique. It’s stupid, but as Otogawa says, it has some sharp parts and some pretty parts. It was my request that they appeared on the day before “Quick Japan” (laughs). That much they have love. What was surprising since the broadcast started was that Yamamoto became popular. I thought it was a bit sober character, but I understand that sympathy gathers in that position, which is sandwiched from above and below even though it seems to be a good man (laughs).
This yuanI also like Yamamoto. I’m writing the script, but I didn’t feel like I was reading the lines, including the voice. I felt that a person named Yamamoto was speaking properly.

――Did you have a character who said, “When I’m writing this character, the brush rides”?
This yuanIt’s Shibagaki from Homo sapiens. I also have a mindset of Shibagaki.
HiragaOh, I think I understand. The contents of Shibagaki and Tsukkomi are also very interesting. I wonder if Mr. Konomoto’s thoughts are partly included, if not all.

――Is there a mindset in Konomoto-san that the world doesn’t understand?
This yuanI agree. There is also that, and while I’m worried that I don’t know what’s interesting though it’s popular, I also understand that this side is out of sync. It’s that feeling.

Not only the mystery element, but also the fun of the story after the 10th episode

――The reaction after the broadcast became bigger as the number of times increased, but was it within your expectations?
HiragaIt was a work with a strong mystery color, so I wanted it to be exciting, but I was surprised that the motivation of those who consider it more than I imagined.
KinoshitaBut, viewers, it’s insanely sharp, isn’t it? At the stage of episodes 1 and 2, some people have considered it quite well, and some people seem to be able to interpret it.
HiragaIt’s a mysterious work until the very end, but after watching it, I think it’s not only exciting to think “this was this”, but also the content that draws you into the story of the character. I also reviewed the past episodes in the form of “This hint is” until the middle, but after the 10th episode, I can not take my eyes off the fun of the story. I think that is the most attractive point of “Odd Taxi”. You can enjoy solving the mystery and collecting hints, but the story of the 13th episode, which features the traumas and problems of various people including Otogawa, may have overwhelmed the viewers. .. 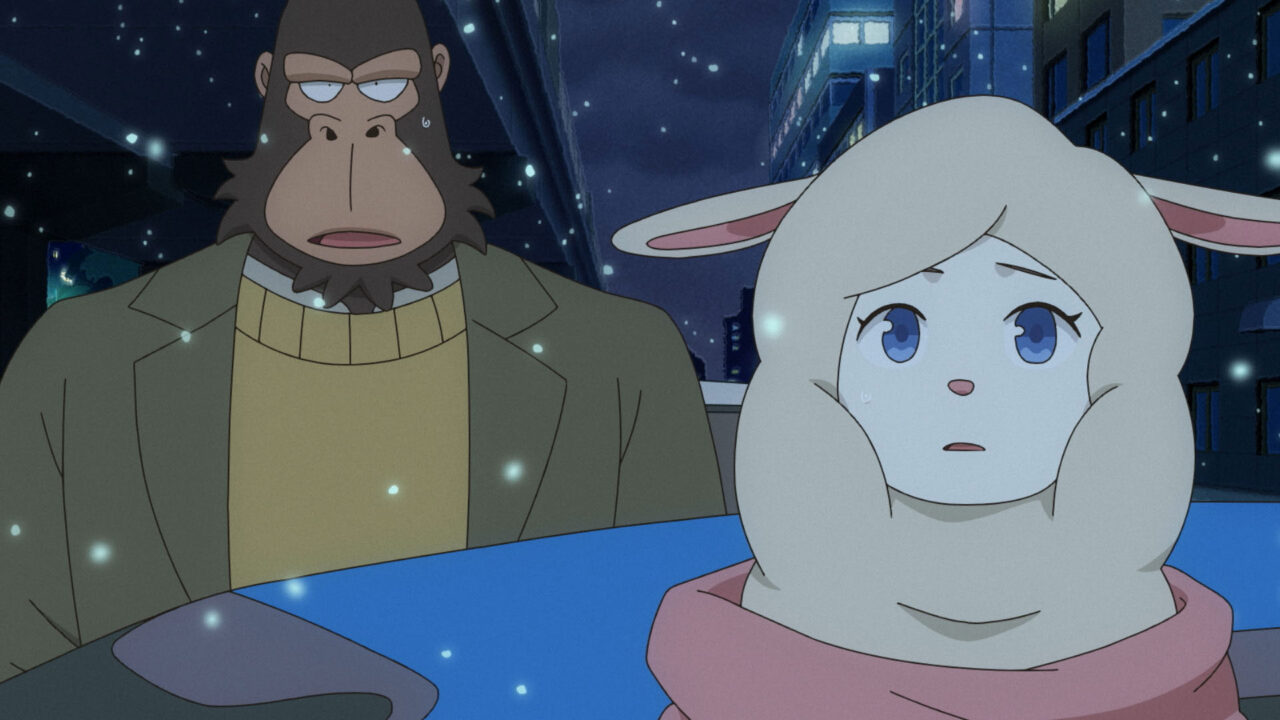 ――In the final episode, the viewer will see the world as a “human” like Otogawa, but wasn’t it difficult to draw?
KinoshitaI didn’t have much trouble over there. The scene where the taxi jumped out of the bridge and overlapped with the moon was overwhelmingly dramatic and cool from the scenario stage. If there was that scene, the reasoning after that wouldn’t bother me so much.

――How did Mr. Konomoto see the excitement of the world?
This yuanWhen I look at my impressions, I often get specific titles such as “similar to XX” or “reminiscent of △△”. However, I haven’t seen almost any of them (laughs).
Hiraga(Lol). When I read “Setoutsumi”, I imagined that Mr. Konomoto was a maniac who was watching and reading movies and manga, but that’s not the case at all. It was pretty shocking. It is said that he is reading various novels by that amount.
This yuanRecently, I also watch movies. I thought there was only room for growth (laughs).
Kinoshita(Lol). But I think Konomoto-san’s antenna is amazing. There are antennas such as online salons as motifs and laughter that does not hurt people.

――It was written before the full-scale boom of PEKOPA.
This yuanWhen I started writing, it wasn’t that far yet. I wonder if there was such a trend.
KinoshitaThat’s why I thought that I had a line of sight two to three years from now.

–Mr. Kinoshita and Mr. Hiraga, how was your experience this time?
KinoshitaIt was an original work, so it took a lot of time, and it was really hard to make one (laughs). However, when I put it out into the world as a TV animation, there were various reactions, and I realized that the spread of TV content and its power still exist.
HiragaWe also produce live-action dramas, but we didn’t have much know-how about anime, so on the contrary, we were able to make it without being aware of that, which was the part that interest the viewers. I think it’s one. After that, it was interesting that the work was distributed overseas and the reaction was seen directly. Even if I’m on Instagram, there are quite a few overseas viewers coming in. I think it’s not an exaggeration, but a work that depicts real Japan, but I’m glad that it was accepted by foreigners. Actually, the production side didn’t really consider the popularity overseas, but I think that they enjoyed the fun of the composition and story development regardless of the country.

――Are there any works you would like to work on from now on?
KinoshitaMany people saw “Odd Taxi” as a noir, and many said that the violence description was real and interesting, so I would like to pursue the noir feeling as my own writer.

――How do you feel about Konomoto-san being involved in animation production?
This yuanIn terms of freedom, I think there is more manga. However, I understood the freedom of animation because there were more restrictions than animation when I was allowed to do live-action photography.

–Are there any parts that will affect future manga production and screenplay work?
This yuanThere is. Certainly … but I don’t know where to say (laughs).

Kinoshita wheat
Kinoshita. An anime director and illustrator belonging to PICS management. Debuted as a director with “Odd Taxi”, which he also designs characters.
This Yuan He Jin Ye
This is Kazuya. Manga artist and screenwriter. His representative work is the manga “Setoutsumi”. Belonging to PICS management since 2018, he has participated in live-action and anime works as a screenwriter, expanding the range of his activities.
Daisuke Hiraga
Hiragadaisuke. A producer belonging to PICS and a founding member. He is mainly involved in the planning, development and production of original content, and created “Odd Taxi” with Director Kinoshita.

Hello everyone, I am Lee Jang-gyun for this open cultural tour. With the global popularity of our Korean singing groups...